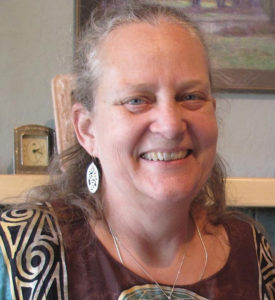 Caren Catterall was born and raised in California and graduated from California College of Arts and Crafts in Oakland CA in 1974. The program there encouraged you to explore different mediums during your freshman year and that is how she found printmaking. In high school her focus was on watercolors, but she was reluctant to let go of her artwork. She discovered with printmaking you had multiples to keep and sell, and could even make them affordable.

Following friends from Oakland to Sonoma County, she discovered the etching classes at Santa Rosa Junior College and eventually became the Printmaking Lab Technician. Caren will be retiring this summer 2022 after 30 years at that job. She feels very blessed to have had a regular job as an artist, and to be able to help others discover all the delights of printmaking.

In 2002 Caren got a small press and rented a large, light-filled studio at the Studio Santa Rosa, at the old Navy Air Base in Santa Rosa. The many artists in the building became known as “The Barracks Artists”.  She started the Studio Print Shop, offering membership to experienced printmakers to share the equipment needed for their craft. Through a fortunate connection, she was able to buy a bigger, wonderful workhorse of a press, the Sturges CP5 star wheel. Bringing it in a second story was a huge challenge, using 4 strong guys, an engine hoist, piano dolly, and a fork-lift—a nerve-wracking day!

Hot Off the Press

After many years at the Barracks, in 2012 Caren moved the studio to a converted barn in a beautiful redwood grove outside of Sebastopol. The space has the lovely benefit of being able to work with the big barn doors open to the trees and the breeze.  Hot Off the Press Printmaking Studio membership continues, and is a most serene and peaceful place to create.

Caren lives with her husband Greg near the Russian River in Guerneville (Sonoma County, California). They raised two boys, Merlin and Cassidy, on a beautiful piece of property above the trees and canyons. Caren’s interest in gardening led to publishing a Gardening by the Moon planting calendar which shows the best times for planting by the phase and sign of the moon. After 23 years of that, she has sold that business in 2022 and will be happy to spend more time on art.